Published in the Pennsylvania Journal on March 8, 1775, this essay was put into the Paine corpus by Moncure Conway in 1894. Other than Paine’s opposition to slavery, there is no basis to consider this Paine’s work other than Benjamin Rush’s confused letter in 1809 referring to an anti-slavery article by Paine. There are several errors in Rush’s letter due to the 30 year lapse, and his embellishments to actual historic fact put the letter into question on accuracy.

The content of the essay does not hold up: the author uses religious references to oppose slavery, with many christian references (Paine opposed slavery on the basis of natural law). The note sent with the article to the printer is signed “A. B.”, which could refer to either Anthony Benezet or Francis Hopkinson (who used that signature in that period). However testing shows that another abolitionist of the time, and a friend to Benezet, Samuel Hopkins, was the author. He was a Christian preacher in Rhode Island, and must have sent the essay to Benezet to have him insert it in a Philadelphia paper, thus the note by Benezet asking the printer to publish it. As well, compared with other abolitionist tracts by Hopkins, the same religious basis, arguments, and phrases appear in both.

Here is the testing summary: The first several tests produced different author possibilities; this happens when the actual author is not present in the groups selected. So we searched for others, and Hopkins was the decisive winner in every test made with him included. (Note: a consistent 40% by one author against many groups is sufficient indication that that author is the most probable.) 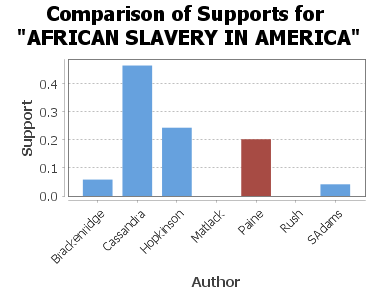 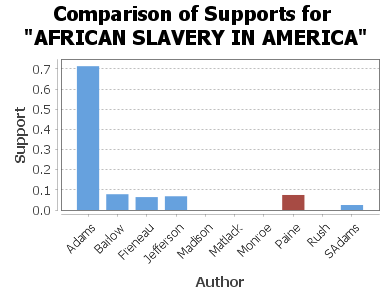 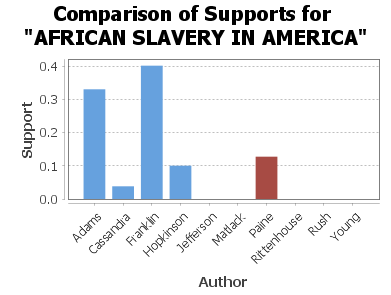 Groups of authors without Hopkins result in different authors winning (above); however with Hopkins, the result is always the same: 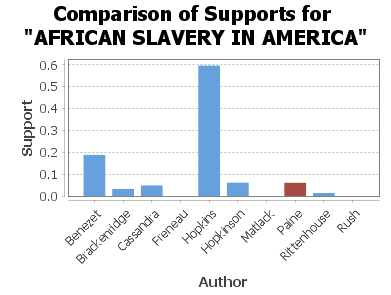 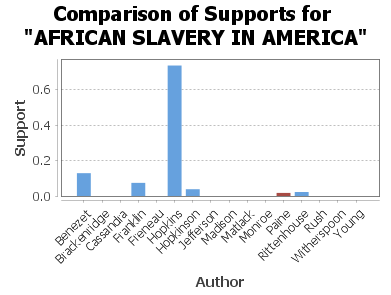 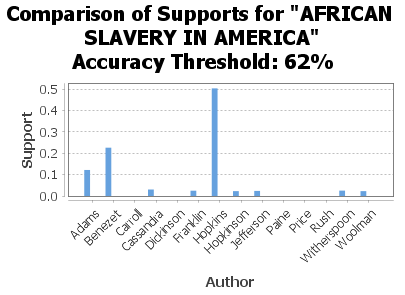 and Hopkins always beats the winners of the not-Hopkins groupings decisively.

We include the text for your convenience.

TO Americans: That some desperate wretches should be willing to steal and enslave men by violence and murder for gain, is rather lamentable than strange. But that many civilized, nay, Christianized people should approve, and be concerned in the savage practice, is surprising; and still persist, though it has been so often proved contrary to the light of nature, to every principle of justice and humanity, and even good policy, by a succession of eminent men (1), and several late publications.

Our traders in MEN (an unnatural commodity!) must know the wickedness of that SLAVE-TRADE, if they attend to reasoning, or the dictates of their own hearts; and such as shun and stifle all these willfully sacrifice conscience, and the character of integrity to that golden idol.

The managers of that trade themselves, and others, testify, that many of these African nations inhabit fertile countries, are industrious farmers, enjoy plenty, and lived quietly, averse to war, before the Europeans debauched them with liquors, and bribing them against one another; and that these inoffensive people are brought into slavery, by stealing them, tempting kings to sell subjects, which they can have no right to do, and hiring one tribe to war against another, in order to catch prisoners. By such wicked and inhuman ways the English are said to enslave towards one hundred thousand yearly; of which thirty thousand are supposed to die by barbarous treatment in the first year; besides all that are slain in the unnatural wars excited to take them. So much innocent blood have the managers and supporters of this inhuman trade to answer for to the common Lord of all!

Many of these were not prisoners of war, and redeemed from savage conquerors, as some plead; and they who were such prisoners, the English, who promote the war for that very end, are the guilty authors of their being so; and if they were redeemed, as is alleged, they would owe nothing to the redeemer but what he paid for them.

They show as little reason as conscience who put the matter by with saying-“Men, in some cases, are lawfully made slaves, and why may not these?” So men, in some cases, are lawfully put to death, deprived of their goods, without their consent; may any man, therefore, be treated so, without any conviction of desert? Nor is this plea mended by adding-“They are set forth to us as slaves, and we buy them without farther inquiry, let the sellers see to it.” Such men may as well join with a known band of robbers, buy their ill-got goods, and help on the trade; ignorance is no more pleadable in one case than the other; the sellers plainly own how they obtain them. But none can lawfully buy without evidence that they are not concurring with men-stealers; and as the true owner has a right to reclaim his goods that were stolen, and sold; so the slave, who is proper owner of his freedom, has a right to reclaim it, however often sold.

Most shocking of all is alleging the sacred scriptures to favor this wicked practice. One would have thought none but infidel cavilers would endeavor to make them appear contrary to the plain dictates of natural light, and conscience, in a matter of common justice and humanity; which they cannot be. Such worthy men, as referred to before, judged otherways; Mr. Baxter declared, the slave-traders should be called devils, rather than Christians; and that it is a heinous crime to buy them. But some say, “the practice was permitted to the Jews.” To which may be replied.

As much in vain, perhaps, will they search ancient history for examples of the modern slave-trade. Too many nations enslaved the prisoners they took in war. But to go to nations with whom there is no war, who have no way provoked, without farther design of conquest, purely to catch inoffensive people, like wild beasts, for slaves, is an height of outrage against humanity and justice, that seems left by heathen nations to be practised by pretended Christians. How shameful are all attempts to color and excuse it!

As these people are not convicted of forfeiting freedom, they have still a natural, perfect right to it; and the governments whenever they come should, in justice set them free, and punish those who hold them in slavery.

So monstrous is the making and keeping them slaves at all, abstracted from the barbarous usage they suffer, and the many evils attending the practice; as selling husbands away from wives, children from parents, and from each other, in violation of sacred and natural ties; and opening the way for adulteries, incests, and many shocking consequences, for all of which the guilty masters must answer to the final Judge.

If the slavery of the parents be unjust, much more is their children’s; if the parents were justly slaves, yet the children are born free; this is the natural, perfect right of all mankind; they are nothing but a just recompense to those who bring them up: And as much less is commonly spent on them than others, they have a right, in justice, to be proportionably sooner free.

Certainly one may, with as much reason and decency, plead for murder, robbery, lewdness, and barbarity, as for this practice. They are not more contrary to the natural dictates of conscience, and feelings of humanity; nay, they are all comprehended in it.

But the chief design of this paper is not to disprove it, which many have sufficiently done; but to entreat Americans to consider.

These are the sentiments of