This essay was probably written by Philip Freneau, but again Francis Hopkinson also tests well against Paine. Freneau and/or Hopkinson beat Paine in every test, so Paine may have edited it, but he is not the author. 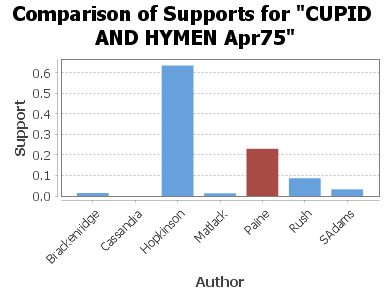 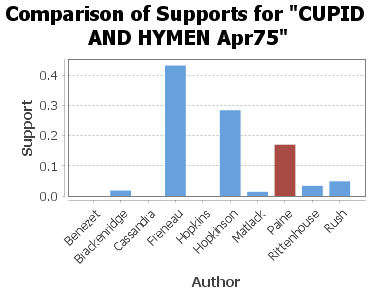 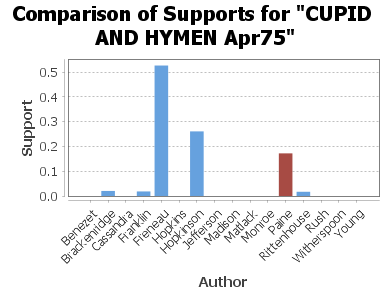 AS THE little amorous deity was one day winging his way over a village in Arcadia, he was drawn by the sweet sound of the pipe and tabor, to descend and see what was the matter. The gods themselves are sometimes ravished with the simplicity of mortals. The groves of Arcadia were once the country seats of the celestials, where they relaxed from the business of the skies, and partook of the diversions of the villagers. Cupid being descended, was charmed with the lovely appearance of the place. Every thing he saw had an air of pleasantness. Every shepherd was in his holiday dress, and every shepherdess was decorated with a profusion of flowers. The sound of labor was not heard among them. The little cottages had a peaceable look, and were almost hidden with arbors of jessamine and myrtle. The way to the temple was strewn with flowers, and enclosed with a number of garlands and green arches. Surely, quoth Cupid, here is a festival today. I’ll hasten and inquire the matter.

So saying, he concealed his bow and quiver, and took a turn through the village. As he approached a building distinguished from all the rest by the elegance of its appearance, he heard a sweet confusion of voices mingled with instrumental music. What is the matter, said Cupid to a swain who was sitting under a sycamore by the way-side, and humming a very melancholy tune, why are you not at the feast, and why are you so sad? I sit here, answered the swain, to see a sight, and a sad sight ’twill be. What is it, said Cupid, come tell me, for perhaps I can help you. I was once happier than a king, replied the swain, and was envied by all the shepherds of the place, but now everything is dark and gloomy, because-Because what? said Cupid-Because I am robbed of my Ruralinda. Gothic, the Lord of the manor, hath stolen her from me, and this is to be the nuptial day. A wedding, quoth Cupid, and I know nothing of it, you must be mistaken, shepherd, I keep a record of marriages, and no such thing has come to my knowledge. ’Tis no wedding, I assure you, if I am not consulted about it. The Lord of the manor, continued the shepherd, consulted nobody but Ruralinda’s mother, and she longed to see her fair daughter the Lady of the manor. He hath spent a deal of money to make all this appearance, for money will do anything; I only wait here to see her come by, and then farewell to the hills and dales. Cupid bade him not be rash, and left him. This is another of Hymen’s tricks, quoth Cupid to himself, he hath frequently served me thus, but I’ll hasten to him, and have it out with him. So saying, he repaired to the mansion. Everything there had an air of grandeur rather than of joy, sumptuous but not serene. The company were preparing to walk in procession to the temple. The Lord of the manor looked like the father of the village, and the business he was upon gave a foolish awkwardness to his age and dignity. Ruralinda smiled, because she would smile, but in that smile was sorrow. Hymen with a torch faintly burning on one side only stood ready to accompany them. The gods when they please can converse in silence, and in that language Cupid began on Hymen.

me as a clerk, not as a rival, much less a superior. ’Tis my province to form the union, and yours to witness it. But of late you have treacherously assumed to set up for yourself. ’Tis true you may chain couples together like criminals, but you cannot yoke them like lovers; besides you are such a dull fellow when I am not with you, that you poison the felicities of life. You have not a grace but what is borrowed from me. As well may the moon attempt to enlighten the earth without the sun, as you to bestow happiness when I am absent. At best you are but a temporal and a temporary god, whom Jove has appointed not to bestow, but to secure happiness, and restrain the infidelity of mankind. But assure yourself that I’ll complain of you to the synod.

This is very high indeed, replied Hymen, to be called to an account by such a boy of a god as you are. You are not of such importance in the world as your vanity thinks; for my own part I have enlisted myself with another master, and can very well do without you. Plutus (God of riches.-Author.) and I are greater than Cupid; you may complain and welcome, for Jove himself descended in a silver shower and conquered: and by the same power the Lord of the manor hath won a damsel, in spite of all the arrows in your quiver.

Cupid, incensed at this reply, resolved to support his authority, and expose the folly of Hymen’s pretentions to independence. As the quarrel was carried on in silence, the company were not interrupted by it. The procession began to set forward to the temple, where the ceremony was to be performed. The Lord of the manor led the beautiful Ruralinda like a lamb devoted to sacrifice. Cupid immediately despatched a petition for assistance to- his mother on one of the sun-beams, and the same messenger returning in an instant, informed him that whatever he wished should be done. He immediately cast the old lord and Ruralinda into one of the most extraordinary sleeps ever known. They continued walking in the procession, talking to each other, and observing every ceremony with as much order as if they had been awake; their souls had in a manner crept from their bodies, as snakes creep from their skin, and leave the perfect appearance of themselves behind. And so rapidly does imagination change the landscape of life, that in the same space of time which passed over while they were walking to the temple, they both ran through, in a strange variety of dreams, seven years of wretched matrimony. In which imaginary time, Gothic experienced all the mortification which age wedded to youth must expect; and she all the infelicity which such a sale and sacrifice of her person justly deserved.

In this state of reciprocal discontent they arrived at the temple. Cupid still continued them in their slumber, and in order to expose the consequences of such marriages, he wrought so magically on the imaginations of them both, that he drove Gothic distracted at the supposed infidelity of his wife, and she mad with joy at the supposed death of her husband; and just as the ceremony was about to be performed, each of them broke out into such passionate soliloquies, as threw the whole company into confusion. He exclaiming, she rejoicing; he imploring death to relieve him, and she preparing to bury him; gold, quoth Ruralinda, may be bought too dear, but the grave has befriended me. The company believing them mad, conveyed them away, Gothic to his mansion, and Ruralinda to her cottage. The next day they awoke, and being grown wise without loss of time, or the pain of real experience, they mutually declined proceeding any farther. The old lord continued as he was, and generously bestowed a handsome dowry on Ruralinda, who was soon after wedded to the young shepherd, that had piteously bewailed the loss of her. The authority of Cupid was re-established, and Hymen ordered never more to appear in the village, unless Cupid introduced him.