Although he was the clerk of the Assembly at that time, he arrived on the day it was enacted. Conway included it in his Writings of Thomas Paine, Vol II, but says the act language starting in part III was written by George Bryan, and Conway included it because he claims Paine wrote a similar essay “African Slavery in America”. But Paine didn’t write that. The writing is similar to Anthony Benezet, and he would be the man in Philadelphia at that time to consult about such an act, as he was the leading anti-slavery author of the time. 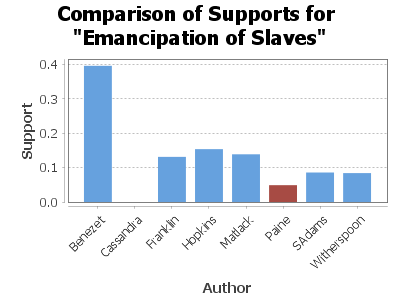 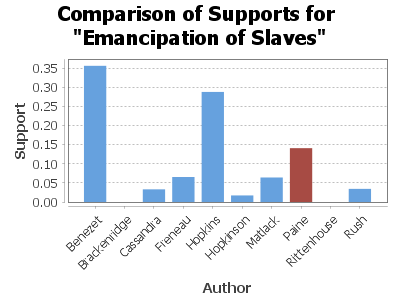 WHEN we contemplate our abhorrence of that condition, to which the arms and tyranny of Great Britain were exerted to reduce us, when we look back on the variety of dangers to which we have been exposed, and how miraculously our wants in many instances have been supplied, and our deliverances wrought, when even hope and human fortitude have become unequal to the conflict, we are unavoidably led to a serious and grateful sense of the manifold blessings which we have undeservedly received from the hand of that Being, from whom every good and perfect gift cometh.

Impressed with these ideas, we conceive that it is our duty, and we rejoice that it is in our power, to extend a portion of that freedom to others, which has been extended to us, and release them from the state of thralldom, to which we ourselves were tyrannically doomed, and from which we have now every prospect of being delivered. It is not for us to inquire why, in the creation of mankind, the inhabitants of the several parts of the earth were distinguished by a difference in feature or complection. It is sufficient to know that all are the work of the Almighty Hand. We find in the distribution of the human species, that the most fertile as well as the most barren parts of the earth are inhabited by men of complexions different from ours, and from each other; from whence we may reasonably as well as religiously infer, that He, who placed them in their various situations, has extended equally His care and protection to all, and that it becomes not us to counteract His mercies.

We esteem it a peculiar blessing granted to us, that we are enabled this day to add one more step to universal civilization, by removing, as much as possible, the sorrows of those who have lived in undeserved bondage, and from which, by the assumed authority of the kings of Great Britain, no effectual legal relief could be obtained. Weaned, by a long course of experience, from those narrow prejudices and partialities we had imbibed, we find our hearts enlarged with kindness and benevolence toward men of all conditions and nations; and we conceive ourselves at this particular period particularly called upon by the blessings which we have received, to manifest the sincerity of our profession, and to give a substantial proof of our gratitude.