New Anecdotes of Alexander the Great

Probably written by Philip Freneau who wrote many articles in 1775, but Hopkinson is strong as well. Testing yeilds: 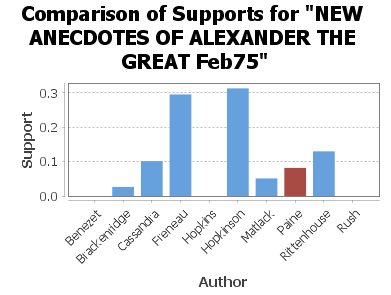 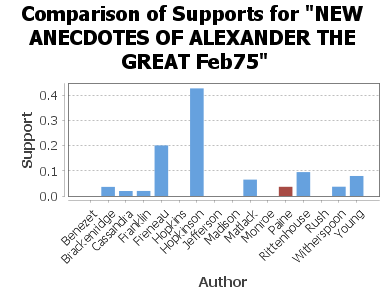 The writing is not in the style that Paine ever used elsewhere, using references to the “happy wildness”, “the two terrestrial Charons, who ferried me over the Schuykill”, is not Paine; and especially the reference to “the servants of great men always imitate their masters” is definitely not Paine.

New Anecdaotes of Alexander the Great

ON one of those calm and gloomy days, which have a strange effect in disposing the mind to pensiveness, I quitted the busy town and withdrew into the country. As I passed towards the Schuylkill, my ideas enlarged with the prospect, and sprung from place to place with an agility for which nature had not a simile. Even the eye is a loiterer, when compared with the rapidity of the thoughts. Before I could reach the ferry, I had made the tour of the creation, and paid a regular visit to almost every country under the sun; and while I was crossing the river, I passed the Styx, and made large excursions into the shadowy regions; but my ideas relanded with my person, and taking a new flight inspected the state of things unborn. This happy wildness of imagination makes a man a lord of the world, and discovers to him the value and the vanity of all it possesses.

Having discharged the two terrestrial Charons, who ferried me over the Schuylkill, I took up my staff and walked into the woods. Every thing conspired to hush me into a pleasing kind of melancholy-the trees seemed to sleep-and the air hung round me with such unbreathing silence, as if listening to my very thoughts. Perfectly at rest from care or business, I suffered my ideas to pursue their own unfettered fancies; and in less time than what is required to express it in, they had again passed the Styx and toured many miles into the new country.

As the servants of great men always imitate their masters abroad, so my ideas, habiting themselves in my likeness, figured away with all the consequence of the person they belonged to; and calling themselves when united, I and Me, wherever they went, brought me on their return the following anecdotes of Alexander, viz.

Having a mind to see in what manner Alexander lived in the Plutonian world, I crossed the Styx (without the help of Charon, for the dead only are his fare), and inquired of a melancholy looking shade, who was sitting on the banks of the river, if he could give me any account of him, Yonder he comes, replied the shade, get out of the way or you II be run over. Turning myself round I saw a grand equipage rolling towards me, which filled the whole avenue. Bless me! thought I, the gods still continue this man in his insolence and pomp! The chariot was drawn by eight horses in golden harness, and the whole represented his triumphal return, after he had conquered the world. It passed me with a splendor I had never seen before, and shined so luminously up into the country, that I discovered innumerable shades sitting under the trees, which before were invisible. As there were two persons in the chariot equally splendid, I could not distinguish which was Alexander, and on requiring that information of the shade, who still stood by, he replied, Alexander is not there. Did you not, continued I, tell me that Alexander was coming, and bid me get out of the way? Yes, answered the shade, because he was the forehorse on the side next to us. Horse! I mean Alexander the Emperor. I mean the same, replied the shade, for whatever he was on the other side of the water is nothing now, he is a HORSE here; and not always that, for when he is apprehensive that a good licking is intended for him, he watches his opportunity to roll out of the stable in the shape of a piece of dung, or in any other disguise he can escape by. On this information I turned instantly away, not being able to bear the thought of such astonishing degradation, notwithstanding the aversion I have to his character. But curiosity got the better of my compassion, and having a mind to see what sort of a figure the conquerer of the world cut in the stable, I directed my flight thither; he was just returned with the rest of the horses from the journey, and the groom was rubbing him down with a large furz bush, but turning himself round to get a still larger and more prickly one that was newly brought in, Alexander watched the opportunity, and instantly disappeared, on which I quitted the place, lest I should be suspected of stealing him; when I had reached the bands of the river, and was preparing to take my flight over, I perceived that I had picked up a bug among the Plutonian gentry, and thinking it was needless to increase the breed on this side the water, was going to dispatch it, when the little wretch screamed out, Spare Alexander the GREAT. On which I withdrew the violence I was offering to his person, and holding up the emperor between my finger and thumb, he exhibited a most contemptible figure of the downfall of tyrant greatness. Affected with a mixture of concern and compassion (which he was always a stranger to) I suffered him to nibble on a pimple that was newly risen on my hand, in order to refresh him; after which I placed him on a tree to hide him, but a Tom Tit coming by, chopped him up with as little ceremony as he put whole kingdoms to the sword. On which I took my flight, reflecting with pleasure that I was not ALEXANDER THE GREAT.