Somehow the author knew the contents of Jay’s Treaty months before its release. Paine was just out of prison and ill. The two people in the American government close to Paine may have had access to that information, Barlow and Monroe, may have supplied him with it, but testing shows Paine was not the author. Perhaps Barlow or Monroe: 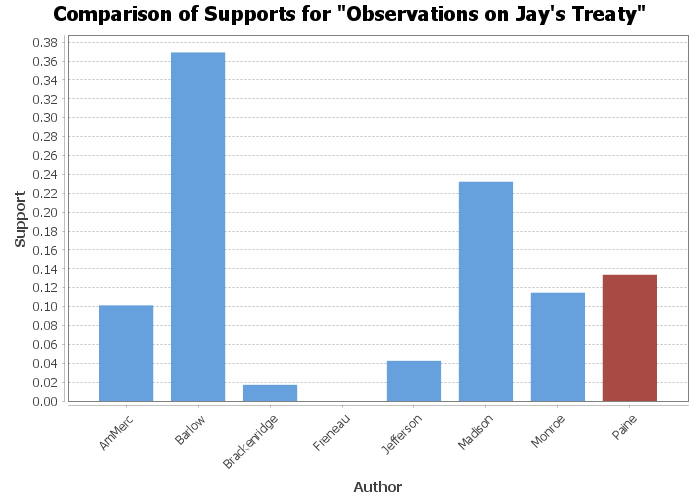 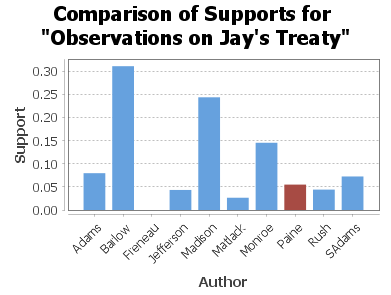 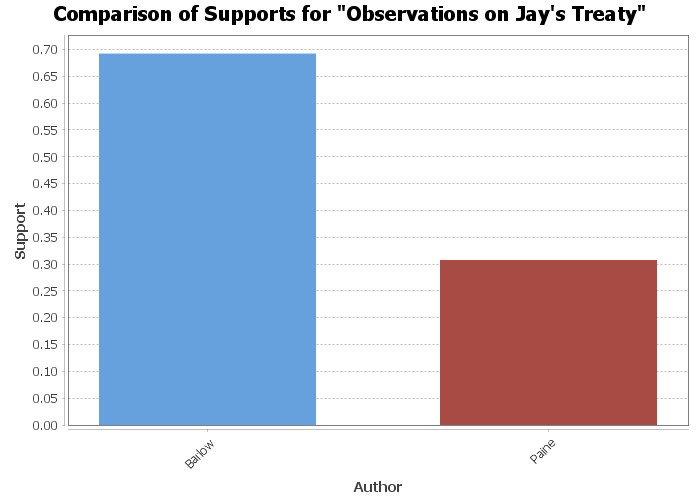 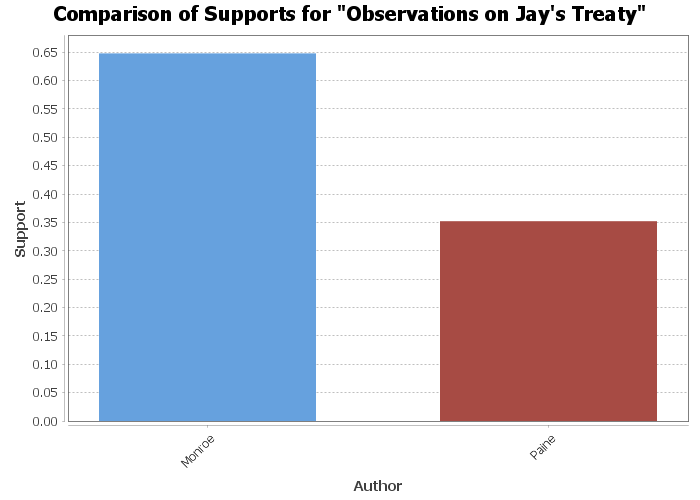 The United States of America are negotiating with Spain respecting the free navigation of the Mississippi1, and the territorial limits of this large river, in conformity with the treaty of peace, with England dated thirtieth November, 1782. As the brilliant successes of the French Republic have forced England to grant us what was in all justice our due, so the continuation of the prosperity of the Republic, will force Spain to make a treaty with us on the points in controversy.

Since it is certain that all that we shall obtain from Spain will be due to the victories of France, and as the inhabitants of the western part of the United States (which part contains or covers more than half the United States), have decided to claim their rights to the free navigation of the Mississippi, would it not be a wiser policy for the Republican Government (who have only to command to obtain) to arrogate all the merit, by making our demands to Spain one of the conditions of France, to consent to restore peace to the Castilians?

They have only to declare they will not make peace, or that they will support with all their might, the just reclamations of their allies against these Powers-against England for the surrender of the frontier posts, and for the indemnities due through their depredations on our trade, and against Spain for our territorial limits, and the free navigation of the Mississippi. This declaration would certainly not prolong the war a single day more, nor cost the Republic an obole, while it would assure all the merit of success to France, and besides produce all the good effects mentioned above.

It may perhaps be observed that the negotiation is already finished with England, and perhaps in a manner which will not be approved of by France. That may be (though the terms of this arrangement may not be known); but as to Spain, the negotiation is still pending, and it is evident that if France makes the above Declaration as to this Power (which declaration would be a demonstrative proof of what she would have done in the other case if circumstances had required it), she would receive the same credit as if the Declaration had been made relatively to the two Powers.

In fact, the decree or resolution (and perhaps this last would be preferable) can be worded in terms which would declare that in case the arrangement with England were not satisfactory, France will nevertheless, maintain the just demands of America against that Power. A like declaration, in case Mr. Jay should do anything reprehensible, and which might even be approved of in America, would certainly raise the reputation of the French Republic to the most eminent degree of splendor, and lower in proportion that of her enemies.

It is very certain that France cannot better favor the views of the British party in America, and wound in a most sensible manner the Republican Government of this country, than by adopting a strict and oppressive policy with regard to us. Everyone knows that the injustices committed by the privateers and other ships belonging to the French Republic against our navigation were causes of exultation and joy to this party, even when their own properties were subjected to these depredations, while the friends of France and the Revolution were vexed and most confused about it.

It follows then that a generous policy would produce quite opposite effects-it would acquire for France the merit that is her due; it would discourage the hopes of her adversaries, and furnish the friends of humanity and liberty with the means of acting against the intrigues of England, and cement the Union, and contribute toward the true interests of the two Republics.

So sublime and generous a manner of acting, which would not cost anything to France, would cement in a stronger way the ties between the two Republics. The effect of such an event, would confound and annihilate in an irrevocable manner all the partisans for the British in America.

There are nineteen-twentieths of our nation attached through inclination and gratitude to France, and the small number who seek uselessly all sorts of pretexts to magnify these small occasions of complaint which might have subsisted previously will find itself reduced to silence, or have to join their expressions of gratitude to ours.

The results of this event cannot be doubted, though not reckoned on: All the American hearts will be French, and England will be afflicted.