Reflections on the Life and Death of Lord Clive

Foner says this essay shows Paine’s interest in India, “together with ‘A Serious Thought’”. But Paine did not write A Serious Thought either. This is a personal study of the tragedy of Clive, Paine uses Clive as an object of ridicule of British colonialism, but the politics is not brought up in this essay. Very unlike Paine. 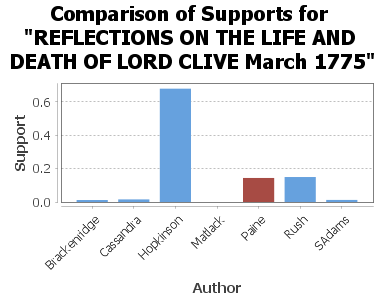 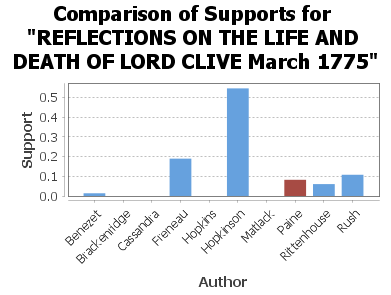 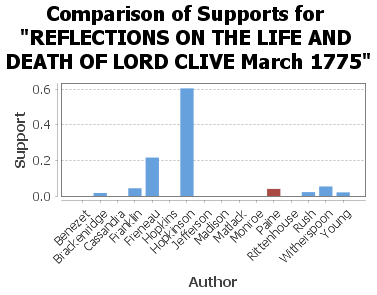 AH! The tale is told-The scene is ended-and the curtain falls. As an emblem of the vanity of all earthly pomp, let his monument be a globe, but be that globe a bubble; let his effigy be a man walking round it in his sleep; and let fame, in the character of a shadow, inscribe his honors on the air.

I view him but as yesterday on the burning plains of Plassey1, doubtful of life, health, or victory. I see him in the instant when “To be or not to be,” were equal chances to a human eye. To be a lord or a slave, to return loaded with the spoils, or remain mingled with the dust of India. Did necessity always justify the severity of a conqueror, the rude tongue of censure would be silent, and however painfully he might look back on scenes of horror, the pensive reflection would not alarm him. Though his feelings suffered, his conscience would be acquitted. The sad remembrance would move serenely, and leave the mind without a wound. But oh India! thou loud proclaimer of European cruelties, thou bloody monument of unnecessary deaths, be tender in the day of inquiry, and show a Christian world thou canst suffer and forgive.

Departed from India, and loaded with plunder, I see him doubling the Cape and looking wistfully to Europe. I see him contemplating on years of pleasure, and gratifying his ambition with expected honors. I see his arrival pompously announced in every newspaper, his eager eye rambling through the crowd in quest of homage, and his ear listening lest an applause should escape him. Happily for him he arrived before his fame, and the short interval was a time of rest. From the crowd I follow him to the court, I see him enveloped in the sunshine of sovereign favor, rivaling the great in honors, the proud in splendor, and the rich in wealth. From the court I trace him to the country, his equipage moves like a camp; every village bell proclaims his coming; the wondering peasants admire his pomp, and his heart runs over with joy.

But, alas! not satisfied with uncountable thousands, I accompany him again to India. I mark the variety of countenances which appear at his landing. Confusion spreads the news. Every passion seems alarmed. The wailing widow, the crying orphan, and the childless parent remember and lament; the rival nabobs court his favor; the rich dread his power, and the poor his severity. Fear and terror march like pioneers before his camp, murder and rapine accompany it, famine and wretchedness follow in the rear.

Resolved on accumulating an unbounded fortune, he enters into all the schemes of war, treaty, and intrigue. The British sword is set up for sale; the heads of contending nabobs are offered at a price, and the bribe taken from both sides. Thousands of men or money are trifles in an India bargain. The field is an empire, and the treasure almost without end. The wretched inhabitants are glad to compound for offences never committed, and to purchase at any rate the privilege to breathe; while he, the sole lord of their lives and fortunes, disposes of either as he pleases, and prepares for Europe2.

Uncommon fortunes require an uncommon date of life to enjoy them in. The usual period is spent in preparing to live: And unless nature prolongs the time, fortune bestows her excess of favors in vain.

The conqueror of the east having nothing more to expect from the one, has all his court to make to the other. Anxiety for wealth gives place to anxiety for life; and wisely recollecting that the sea is no respecter of persons, resolves on taking his route to Europe by land. Little beings move unseen, or unobserved, but he engrosses whole kingdoms in his march, and is gazed at like a comet. The burning desert, the pathless mountains, and the fertile valleys, are in their turns explored and passed over. No material accident distresses his progress, and England once more receives the spoiler.

How sweet is rest to the weary traveler; the retrospect heightens the enjoyment; and if the future prospect be serene, the days of ease and happiness are arrived. An uninquiring observer might have been inclined to consider Lord Clive, under all these agreeable circumstances, one whose every care was over, and who had nothing to do but sit down and say, Soul, take thine ease, thou hast goods laid up in store for many years.

The reception which he met with on his second arrival, was in every instance equal to, and in many exceeded, the honors of the first. ’Tis the peculiar temper of the English to applaud before they think. Generous of their praise, they frequently bestow it unworthily: but when once the truth arrives, the torrent stops, and rushes back again with the same violence3. Scarcely had the echo of the applause ceased upon the ear, then the rude tongue of censure took up the tale. The newspapers, fatal enemies to ill-gotten wealth! began to buzz a general suspicion of his conduct, and the inquisitive public soon refined it into particulars. Every post gave a stab to his fame-a wound to his peace-and a nail to his coffin. Like spectres from the grave they haunted him in every company, and whispered murder in his ear. A life chequered with uncommon varieties is seldom a long one. Action and care will in time wear down the strongest frame, but guilt and melancholy are poisons of quick despatch.

Say, cool deliberate reflection was the prize, though abstracted from the guilt, worthy of the pains? Ah no! Fatigued with victory he sat down to rest, and while he was recovering breath he lost it. A conqueror more fatal than himself beset him, and revenged the injuries done to India.

As a cure for avarice and ambition let us take a view of him in his latter years. Ha! what gloomy being wanders yonder? How visibly is the melancholy heart delineated on his countenance. He mourns no common care-his very steps are timed to sorrow-he trembles with a kind of mental palsy. Perhaps ’tis some broken hearted parent, some David mourning for his Absalom, or some Heraclitus weeping for the world. I hear him mutter something about wealth. Perhaps he is poor, and has not wherewithal to hide his head. Some debtor started from his sleepless pillow, to ruminate on poverty and ponder on the horrors of a jail. Poor man! I’ll to him and relieve him. Ha! ’tis Lord Clive himself! Bless me, what a change! He makes, I see, for yonder cypress shade-fit scene for melancholy hearts! I’ll watch him there and listen to his story.

LORD CLIVE. “Can I but suffer when a beggar pities me. Erewhile I heard a ragged wretch, who every mark of poverty had on, say to a sooty sweep. Ah, poor Lord Clive! While he the Negro-colored vagrant, more mercifully cruel, cursed me in my hearing.

“There was a time when fortune, like a yielding mistress, courted me with smiles-She never waited to be told my wishes, but studied to discover them, and seemed not happy to herself, but when she had some favor to bestow. Ah! little did I think the fair enchantress would desert me thus; and after lavishing her smiles upon me, turn my reproacher, and publish me in folio to the world. Volumes of morality are dull and spiritless compared to me. Lord Clive is himself a treatise upon vanity, printed in a golden type. The most unlettered clown writes explanatory notes thereon, and reads them to his children. Yet I could bear these insults could I but bear myself. A strange unwelcome something hangs about me. In company I seem no company at all. The festive board appears to me a stage, the crimson colored port resembles blood. Each glass is strangely metamorphosed to a man in armor, and every bowl appears a nabob. The joyous toast is like the sound of murder, and the loud laughs are groans of dying men. The scenes of India are all rehearsed, and no one sees the tragedy but myself. Ah! I discover things which are not, and hear unuttered sounds-

“O peace, thou sweet companion of the calm and innocent! Whither art thou fled? Here take my gold, and all the world calls mine, and come thou in exchange. Or thou, thou noisy sweep, who mix thy food with soot and relish it, who canst descend from lofty heights and walk the humble earth again, without repining at the change, come teach that mystery to me. Or thou, thou ragged wandering beggar, who, when thou canst not beg successfully, will pilfer from the hound, and eat the dirty morsel sweetly; be thou Lord Clive, and I will beg, so I may laugh like thee.

“Could I unlearn what I’ve already learned-unact what I’ve already acted-or would some sacred power convey me back to youth and innocence, I’d act another part-I’d keep within the value of humble life, nor wish for what the world calls pomp.

“But since this cannot be,

And only a few days and sad remain for me,

I’ll haste to quit the scene; for what is life

When every passion of the soul’s at strife?“4