Analysis: Paine signed it as Clerk, but was not the author. He shows no presence at all. When printed in London they attributed it to Paine because his name was on it. Adams (John) is the leading candidate, but that makes little sense in context. 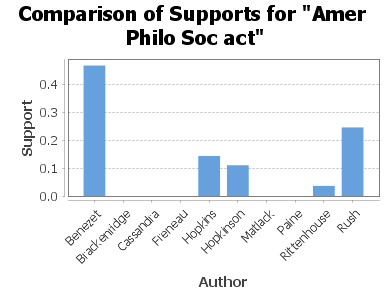 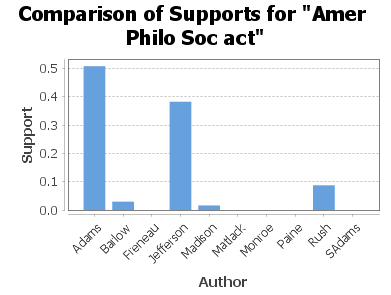 AN ACT FOR INCORPORATING THE AMERICAN PHILOSOPHICAL SOCIETY,

WHEREAS the cultivation of useful knowledge, and the advancement of the liberal arts and sciences in any country, have the most direct tendency toward the improvement of agriculture, the enlargement of trade, the ease and comfort of life, the ornament of society, and the ease and happiness of mankind. And whereas this country of North America, which the goodness of providence hath given us to inherit, from the vastness of its extent, the variety of its climate, the fertility of its soil, the yet unexplored treasures of its bowels, the multitude of its rivers, lakes, bays, inlets and other conveniences of navigation, offers to these United States one of the richest subjects of cultivation ever presented to any people upon earth. And whereas the experience of ages shows that improvements of a public nature are best carried on by societies of liberal and ingenious men, uniting their labors without regard to nation, sect, or party, in one grand pursuit, alike interesting to all, whereby mutual prejudices are worn off, a humane and philosophical spirit is cherished, and youth is stimulated to a laudable diligence and emulation in the pursuit of wisdom.

And whereas, upon these principles, divers public-spirited gentlemen of Pennsylvania and other American States did heretofore unite themselves, under certain regulations into one voluntary Society, by the name of “The American Philosophical Society, held at Philadelphia for Promoting Useful Knowledge,” and by their successful labors and investigations, to the great credit of America, have extended their reputation so far, that men of the first eminence in the republic of letters in the most civilized nations of Europe have done honor to their publications, and desired to be enrolled among their members: And whereas the said Society, after having been long interrupted in their laudable pursuits by the calamities of war, and the distresses of our country, have found means to revive their design, in hopes of being able to prosecute the same with their former success, and of being further encouraged therein by the public, for which purpose they have prayed us, the representatives of the freemen of the Commonwealth of Pennsylvania, that they may be created one body politic and corporate forever, with such powers, and privileges, and immunities as may be necessary for answering the valuable purposes which the said Society had originally in view.

Wherefore, in order to encourage the said Society in the prosecution and advancement of all useful branches of knowledge, for the benefit of their country and mankind, Be it enacted, and it is hereby enacted by the representatives of the freemen of the Commonwealth of Pennsylvania, in General Assembly met, and by the authority of the same. That the members of the said Philosophical Society, heretofore voluntarily associated for promoting useful knowledge, and such other persons as have been duly elected members and officers of the same, agreeably to the fundamental laws and regulations of the said Society* comprised in twelve sections, prefixed to their first volume of transactions, published in Philadelphia, and such other laws and regulations as shall hereafter be duly made and enacted by the Society, according to the tenor hereof, be and for ever hereafter shall be, one body corporate and politic in deed, by the name and style of “The American Philosophical Society held at Philadelphia, for promoting useful knowledge.”

And whereas-nations truly civilized (however unhappily at variance on other accounts) will never wage war with the arts and sciences, and the common interests of humanity; Be it further enacted by the authority aforesaid, that it shall and may be lawful for the said Society, by their proper officers, at all times, whether in peace or war, to correspond with learned societies, as well as individual learned men, of any nation or country; upon matters merely belonging to the business of the said Societies, such as the mutual communication of their discoveries and proceedings in philosophy and science; the procuring books, apparatus, natural curiosities, and such other articles and intelligence as are usually exchanged between learned bodies, for furthering their common pursuits: Provided always, that such correspondence of the said Society be at all times open to the inspection of the supreme Executive Council of this Commonwealth, etc.