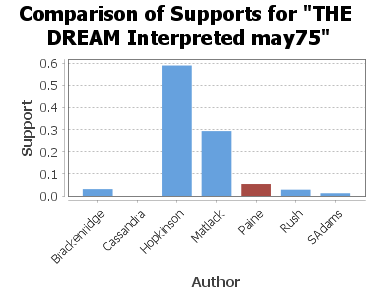 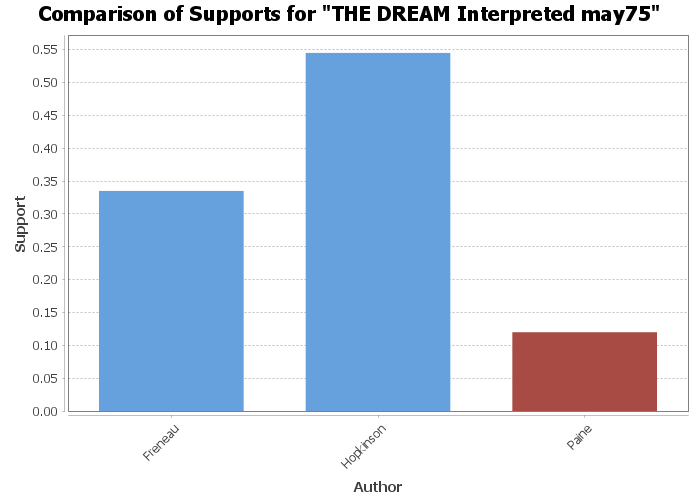 The context of “The Dream Interpreted” should have also raised some questions regarding Paine’s authorship. The fact that it took place in Bucks County (signed “Bucks County”), which is across the river from Bordentown in Pennsylvania, though not definitive, would not fit in with Paine’s movements in the first five months in America. The reference to a “fatiguing journey from Virginia” in the first sentence of the article should also have raised questions, since there is no indication that Paine could have made time to venture such a trip. Bucks County would be the last leg of a trip from Virginia to Bordentown. It would not be part of an itinerary from Virginia to Philadelphia where Paine resided at that time. Paine’s physical involvement in Bordentown did not begin until 1778. Hopkinson also used the device of dreams in other Pennsylvania Magazine articles, such as “The Revery” and “The Extraordinary Dream”. Hopkinson’s more classical style fits this employment of dreams, as does his sweeping grandiose metaphors. In this period of his life, Hopkinson had set aside his musical compositions to focus on experimental writing styles, hence his frequent contributions to the Pennsylvania Magazine.

PARCHED with thirst and wearied with a fatiguing journey to Virginia, I turned out of the road to shelter myself among the shades; in a little time I had the good fortune to light on a spring, and the refreshing draught went sweetly down. How little of luxury does nature want! This cooling stream administered more relief than all the wines of Oporto; I drank and was satisfied; my fatigue abated, my wasted spirits were reinforced, and ’tis no wonder after such a delicious repast that I sunk insensibly into slumber. The wildest fancies in that state of forgetfulness always appear regular and connected; nothing is wrong in a dream, be it ever so unnatural. I am apt to think that the wisest men dream the most inconsistently. For as the judgment has nothing or very little to do in regulating the circumstances of a dream, it necessarily follows that the more powerful and creative the imagination is, the wilder it runs in that state of unrestrained invention; while those who are unable to wander out of the track of common thinking when awake, never exceed the boundaries of common nature when asleep.

But to return from my digression, which in this place is nothing more than that wandering of fancy which every dream is entitled to, and which cannot in either case be applied to myself, as in the dream I am about to relate I was only a spectator, and had no other business to do than to remember.

To what scene or country my ideas had conveyed themselves, or whether they had created a region on purpose to explore, I know not, but I saw before me one of the most pleasing landscapes I have ever beheld. I gazed at it, till my mind partaking of the prospect became incorporated therewith, and felt all the tranquility of the place. In this state of ideal happiness I sat down on the side of a mountain, totally forgetful of the world I had left behind me. The most delicious fruits presented themselves to my hands, and one of the clearest rivers that ever watered the earth rolled along at the foot of the mountain, and invited me to drink. The distant hills were blue with the tincture of the skies, and seemed as if they were the threshold of the celestial region. But while I gazed the whole scene began to change, by an almost insensible gradation. The sun, instead of administering life and health, consumed everything with an intolerable heat. The verdure withered. The hills appeared burnt and black. The fountains dried away; and the atmosphere became a motionless lake of air, loaded with pestilence and death. After several days of wretched suffocation, the sky grew darkened with clouds from every quarter, till one extended storm excluded the face of heaven. A dismal silence took place, as if the earth, struck with a general panic, was listening like a criminal to the sentence of death. The glimmering light with which the sun feebly penetrated the clouds began to fail, till Egyptian darkness added to the horror. The beginning of the tempest was announced by a confusion of distant thunders, till at length a general discharge of the whole artillery of heaven was poured down upon the earth. Trembling I shrunk into the side of a cave, and dreaded the event. The mountain shook, and threatened me with instant destruction. The rapid lightning at every blaze exhibited the landscape of a world on fire, while the accumulating torrent, not in rain, but floods of water, resembled another deluge.

At length the fury of the storm abated, and nature, fatigued with fear and watching, sank into rest. But when the morning rose, and the universal lamp of heaven emerged from the deep, how was I struck with astonishment! I expected to have seen a world in ruins, which nothing but a new creation could have restored. Instead of which, the prospect was lovely and inviting, and had all the promising appearance of exceeding its former glory. The air, purged of its poisonous vapors, was fresh and healthy. The dried fountains were replenished, the waters sweet and wholesome. The sickly earth, recovered to new life, abounded with vegetation. The groves were musical with innumerable songsters, and the long-deserted fields echoed with the joyous sound of the husbandman. All, all was felicity; and what I had dreaded as an evil, became a blessing. At this happy reflection I awoke; and having refreshed myself with another draught from the friendly spring, pursued my journey.

After travelling a few miles I fell in with a companion, and as we rode through a wood but little frequented by travellers, I began, for the sake of chatting away the tediousness of the journey, to relate my dream. I think, replied my friend, that I can interpret it. That beautiful country which you saw is America. The sickly state you beheld her in has been coming on her for these ten years past. Her commerce has been drying up by repeated restrictions, till by one merciless edict the ruin of it is completed. The pestilential atmosphere represents that ministerial corruption which surrounds and exercises its dominion over her, and which nothing but a storm can purify. The tempest is the present contest, and the event will be the same. She will rise with new glories from the conflict, and her fame be established in every corner of the globe; while it will be remembered to her eternal honor that she has not sought the quarrel, but has been driven into it. He who guides the natural tempest will regulate the political one, and bring good out of evil. In our petition to Britain we asked but for peace; but the prayer was rejected. The cause is now before a higher court, the court of providence, before whom the arrogance of kings, the infidelity of ministers, the general corruption of government, and all the cobweb artifice of courts, will fall confounded and ashamed.