The Society for Political Inquiries

Foner claims Paine wrote this, but there is no evidence, and it doesn’t test that way at all. The two components are the Preamble, that appears to be written by Rush, and the Regulations. The Society was a collection of mostly conservative people with the common interest of preparing for the Constitutional Convention and insuring their interests. Franklin was the figurehead to give it legitimacy. Rush is the writer of the Preamble. 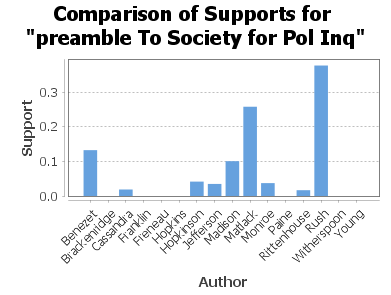 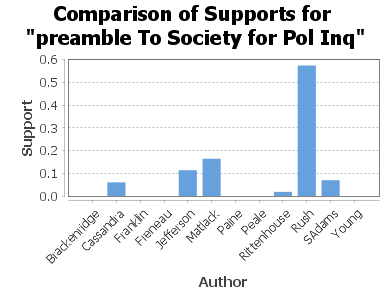 The Society for Political Inquiries

THE moral character and happiness of mankind are so interwoven with the operations of government, and the progress of the arts and sciences is so dependent on the nature of our political institutions that it is essential to the advancement of civilized society to give ample discussion to these topics.

But important as these inquiries are to all, to the inhabitants of these republics they are objects of peculiar magnitude and necessity. Accustomed to look up to those nations, from whom we have derived our origin, for our laws, our opinions and our manners, we have retained with undistinguishing reverence their errors with their improvements have blended with our public institutions the policy of dissimilar countries; and have grafted on an infant commonwealth the manners of ancient and corrupted monarchies. In having effected a separate government, we have as yet effected but a partial independence. The Revolution can only be said to be complete, when we shall have freed ourselves, no less from the influence of foreign prejudices than from the fetters of foreign power. When breaking through the bounds, in which a dependent people have been accustomed to think and act, we shall probably comprehend the character we have assumed and adopt those maxims of policy which are suited to our new situation. While objects of subordinate importance have employed the associated labors of learned and ingenious men, the arduous and complicated science of government has been generally left to the care of practical politicians, or the speculations of individual theorists. From a desire of supplying this deficiency, and of promoting the welfare of our country, it is now proposed to establish a society for mutual improvement in the knowledge of government, and for the advancement of political science.

With these views, the subscribers associate themselves under the title of THE SOCIETY FOR POLITICAL INQUIRIES, and under the following laws and regulations:

I. This society shall consist of fifty residing members, and shall meet every Friday fortnight, at half past six o’clock in the evening (the chair to be taken precisely at seven) except during the months of June, July, August and September, when their meetings shall be discontinued.

V. Every election shall be conducted by ballot, twelve members at least being present; and the votes of three-fourths of the number present, shall be necessary to the admission of the candidate.

X. A fair record shall be kept of the proceedings of the society, which shall be open to the inspection of the members.